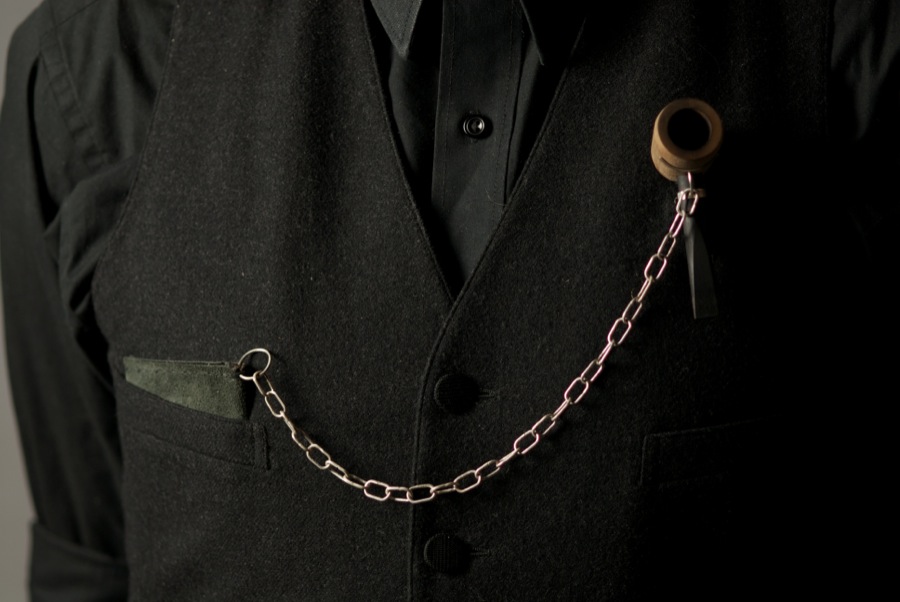 The Gentleman's Vice: A brooch that functions as a sheath for holding a specially made tobacco pipe. It is connected by a chain to a tobacco pouch worn in the breast pocket. Convenient for a night of debauchery.

Michael McGarry's house: My father's house, designed and built by the two of us. On a hill, with large windows overlooking the Boston skyline. Ongoing, Waltham, Ma.

Bike Courier Pro: Bike Courier Pro is a magical-realist, text based, adventure game created by Sophie Griswold and myself. You play as a bike courier, going on absurd delivery quests, trying to find out more about the surreal world you found yourself in. Other artwork by Adriana Gallo and Elena Brunner. 2017, Boston, MA.

Shortcut Gallery, North Wing: Designed and built a display case to be installed in the fence at 97 Daniell. The idea was to democratize art galleries, making them accesible and more community oriented, while also making the fence more than just a barrier. Similar to the Little Free Library project. 2015, Wellington, NZ.

Lighthouse in a Blizzard: An old television, covered in electrical tape, tuned to static; the image of a lighthouse covered in snow is carved into the tape. 2018, Boston, MA.

Papier-mâché Headdresses: A series of headdresses in the spirit of European pagan costumes. Made in collaboration with Sophie Griswold. Ongoing, Boston, MA.

Mask for Sam Hanson: A mask I made for Sam Hanson, drummer for The Department of Everything. Modified, ventilated gas mask and dynamic microphone. Photograph thanks to James Lastowski. 2016, Boston, MA.

Microgravity Repair Facility: Concepts for reapir facility modules based on the dimensions of the International Space Station, designed in coöperation with NASA for possible use in future deep space missions. Incorporates a 3D printer, CNC mill, tool storage, work surfaces and extraction. See more on the tools over here. 2013, Providence, RI.

Tattooed orange: Instructions on how to eat an orange, for Adriana Gallo's project peelorang.es. Hand poked tattoo on an orange. 2015, Wellington, NZ.

Game Boy Synthesizer: Completely custom made synthesizer using the Nintendo Game Boy as the sound chip. Employs an Arduino to interface between the Game Boy and MIDI keyboard. Has MIDI in/out, left/right audio output, volume and contrast control, octave adjustment along with the Game Boy's full, relocated, controls and settings for multiple types of software.

Passport wallet: When living in New Zealand, my passport was the only valid form of ID. I was also sick of poorly made wallets wearing out after a few years, so decided to make a wallet that will last as long as possible, and hold my passport. Sturdy 1/8th inch leather, and marline. 2015, Wellington, NZ.