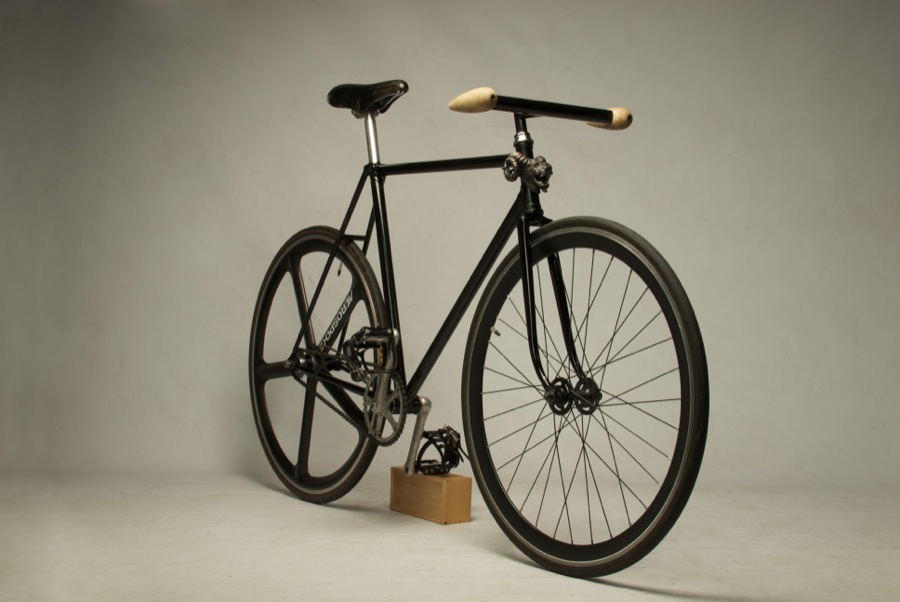 The Grotesque: A brakeless fixed-gear bicycle built, by me, for aggressive commuting. Made from True Temper double-butted steel. I also built the handlebars/stem, curly maple handlebar droplets, the forks and did the paint job. I decided early on that, rather than having a traditional head-badge, I would like a figurehead. Caleb Colpitts sculpted and electroformed the Gargoyle, complete with green sapphire eyes and skunk's teeth.

The Grotesque was featured on CycleEXIF. 2013, Providence, RI.

Puch Magnum: My take on a 1981 Puch Magnum moped. Tank is off a Honda SS50, which was never sold in North America. The Headlamp is a kerosene lamp off of a Ford Model T, which I electrified. Also new forks and disk brakes from a Yamaha YZ80, custom oil bottle cage, new seat, chopped frame, repurposed turn-signal taillight, new rear suspension, and a set of 2.75 inch michelin gazelle tires. Still a work in progress. The good photographs by my friend Sam Waxman. Ongoing, Providence, RI & Boston, MA.

Bicycles: A series of several bicycles built from free components found in the trash. The Orbea was built for myself, made to be nimble and narrow for commuting in London's heavy traffic. The Lotus was built up to ride in a tweed suit through Cambridge. Ongoing series, Boston, MA, London, UK, Providence, RI.

Halcyon: A Rebuild of Halcyon, a 1959 "Nevins 40" Centerboard Yawl, designed by Olin Stephens and built by the H.B. Nevins Boatyard, City Island, NY done at at Gannon & Benjamin. I personally was involved in fairing the cabin house, making the brow trim, fairing the topsides and painting the topsides and bottom, replacing the toe rails and combing, restoring the chain plate along with much interior finish work. 2014-2015, Vineyard Haven, MA.

Blood & Thunder: A sharpie built in the Florida Keys in 1989, neglected on the hard for years. I helped restore it during my apprenticeship at Gannon & Benjamin. It was later given to me and rechristened Blood & Thunder, and is still being improved. 2012, Vineyard Haven, MA.

Moonbuggy: A glorified tandam bicycle for NASA's Human Exploration Rover Challenge, built to fold into a box of set dimensions, and traverse an obstacle course. Designed and built as a team, all brazing done by myself. 2014, Providence, RI.